“I Dodged A Bullet By the Hair” 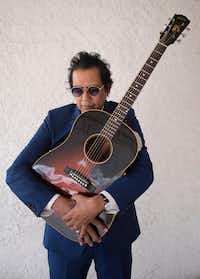 Since collapsing onstage in 2003 in the throes of hepatitis C, Alejandro Escovedo has spent almost as much time talking about his health during interviews as he’s spent talking about music.

But these days, his voice is upbeat and even joyful. Finally cured of the potentially deadly viral infection, the acclaimed Texas rocker, 67, is touring on behalf of the Prevent Cancer Foundation and its mission of making people aware of the connection between viruses and cancer.

“I dodged the bullet by a hair,” he says. “When you go through something like that — and when you watch so many of your friends die from cancer — you do anything you can to further awareness.”

Last year, Escovedo was named a national spokesman for “Think About the Link,” the Foundation’s prevention and education campaign that focuses on three viruses linked to cancer: hepatitis B, hepatitis C and human papillomavirus (HPV).

He’s filmed a public-service announcement, and last month he launched a 12-city “Think About the Link” concert tour that brings him to the Kessler Theater on Feb. 8.

“Alejandro is a wonderful example for people to understand that hepatitis C is a potential silent killer, but there are curative treatments available now,” says Prevent Cancer Foundation president Carolyn “Bo” Aldigé, who founded the organization in 1985. “He has a very positive message that everybody of a certain age or risk factor should be tested.”

Spread through contaminated blood, hepatitis C can cause liver cancer if left untreated.  Doctors are now recommending that people born between 1945 and 1965 get tested, since baby boomers are five times more likely to be infected with the virus than other adults.

The tricky thing about it is people can have the virus for years with no symptoms. Escovedo — who says he’s not sure how he got hep C — had no idea he was infected until 1996, after he felt sick during a Canadian tour and a friend told him “You look worse than Keith Richards.”

Back then, treatment options were limited, and Escovedo kept touring full-throttle. Then, in 2003, he began vomiting blood before going onstage in Phoenix. Somehow, he made it through the show, but he collapsed while leaving the stage.

Friends rushed him to the hospital, where doctors told him the virus had caused advanced cirrhosis of the liver. They also gave him a dire prognosis: He might only have a year to live, maybe less.

Escovedo took the drug interferon until its side effects became unbearable, then relied on meditation, medicinal herbs and acupuncture to keep his symptoms at bay. Meanwhile, an army of his colleagues pitched in to pay his medical bills with the benefit album Por Vida: A Tribute to the Songs of Alejandro Escovedo.

Against all odds, the singer’s hepatitis C never turned into liver cancer, and his condition even stabilized enough for him to resume his career. Still, he continued to struggle with fatigue, compounded by PTSD he and his wife, Nancy, suffered in 2014 after being pummeled by Hurricane Odile while staying at a beachfront house in Mexico during their honeymoon.

“On the fourth day of taking them, I popped out of bed like I was born again … I had all this energy,” he says. “Within six months, it was completely gone … a full cure.”

Two years later, he’s still in awe of his recovery and he beams as he tells his story while sipping a ginger ale at Smoke, the Oak Cliff barbecue restaurant next to the Belmont Hotel. In 2015, he moved from his longtime home near Austin to an apartment at the Belmont after Nancy was hired as a hair stylist for Queen of the South, a TV series being shot in Dallas.

“It really is a miracle, you know?” he says of being free of hepatitis C. “It’s one of those moments where you’re crying tears of joy.”

His mood darkens a bit when he talks about struggling to pay for the medications that probably saved his life. “We had to go beg on hands and knees … it was $80,000 for six months of the drugs,” he says. “To me, that’s a sin. It’s a [expletive] crime. The government should be doing more to make it more affordable, and we have to spread awareness to make change happen in the future.”

For the time being, however, he’s sticking to the task at hand: spreading awareness about vaccinations and early cancer prevention — especially for fellow Hispanics, who suffer from higher rates of hepatitis C than the rest of the U.S. population.

“I wish I’d learned about hepatitis C earlier. But now I’m a story of survival, and I’ll do whatever I can to spread the word.”

More on ‘Think About the Link’

Worldwide, hundreds of thousands of people suffer from cancers caused by viruses, and many of those cases could be prevented through vaccinations, screening and early detection, says Prevent Cancer Foundation president Carolyn “Bo” Aldigé.

The Foundation’s “Think About the Link” campaign is focusing on raising awareness about three viruses linked to cancer: human papillomavirus (HPV), hepatitis B and hepatitis C.

Hepatitis B and C

Not Slowing Down After All These Years, Alejandro Escovedo Sings The People’s Music